"Jukebox" Jamie from Boston Ski + Tennis Gets After It.


The following is the first of a series of profiles – “Partners Who Inspire” – highlighting friends in the outdoor industries that Kulkea works with, and their businesses.

Jamie Worcester's first night on Georgia's Springer Mountain in late March, 2018, at the very start of the Appalachian Trail, was a wake-up call.

“It snowed our first night,” said Worcester. “I had just come from Boston, where we had just gotten a two-foot snowstorm, and I'm hiking up Springer Mountain, on the Approach Trail, which is an extra eight miles, and I'm shedding layers.

“People are saying, 'Oh, we're going to get half an inch,' and I'm thinking, 'We just got two feet of snow in Boston. It wasn't a big deal.' But lo and behold, I had never slept in it,” she said. “So, the first night, I'm hunkered in my tent, and I'm shivering, and literally wearing every article of clothing. And I'm thinking 'What did I just get myself into?'” 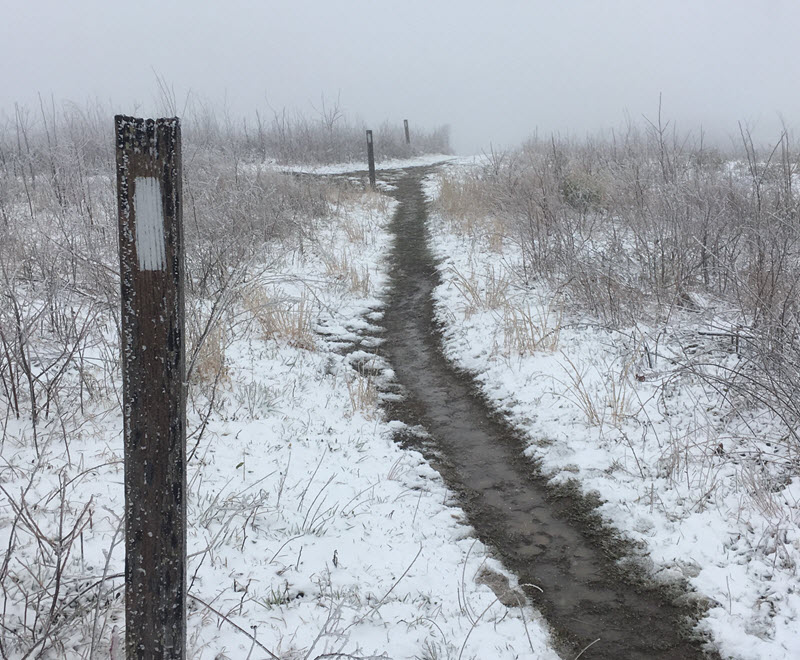 The 28-year-old Worcester had legitimate cause for concern. Despite planning to cover the entire 2,200-mile Appalachian Trail, she had very little hiking, or backpacking, experience. She possessed a strong sense of purpose and a steely resolve, but those often wilt in the face of Mother Nature's ever-changing moods.

A native of Connecticut, Worcester had come north to Boston to attend Lesley University in Cambridge. After earning her degree, she headed north to Maine to become a “ski bum” at Sugarloaf, where she “fell in love” with the outdoor industry. Returning to Boston, she took a job at Boston Ski + Tennis, where she eventually became an assistant manager.

Though she wasn't a hiker, per se, Worcester said she started getting restless. That led to an unconventional commitment.

“I was ready for another big adventure. My mom gave me a book by a gentleman who had hiked the Appalachian Trail – 'Hiking Through' by Paul Stutzman,” she said. “It had to do with his soul-searching along the Appalachian Trail. And I had talked to her about the AT, and thought something like that would be so cool.”


Worcester's first idea proved to be a bit grandiose, but she quickly recalibrated to a more reasonable goal (if a 2,200-mile trek can be considered “reasonable”).

“I had originally wanted to hike the Great Wall of China, and then I realized how long that was,” said Worcester, referring to the 3,889-mile structure that is considered one of the “new” 7 Wonders of the World. “So I toned it down a little bit and figured, I'll do the Appalachian Trail.

“I figured, I'm not in a relationship. I don't own a home. I don't have any kids,” she said. “I work in the outdoor industry, so I get some discounts on gear. And I had a co-worker who was out on maternity leave, and she was coming back about the time I would embark on the journey. So I just started doing a little planning.”

Although she lacked experience, Worcester did have a job that she loved, and was hoping to keep it. So she approached Paul Harrity, owner of Boston Ski + Tennis, and told him her plans.

“The owner of the company has daughters my age, and the conversation was half boss, half dad,” said Worcester. “I started with 'Look, Paul, this (job) has been wonderful. But I feel like I need to do this. I plan on hiking the Appalachian Trail at the end of the ski season. I understand if there's not a place for me when I come back. If there is, I'd love to come back. I'd just really like your guidance and support on this journey.'

“And I'll never forget what he said.’I constantly want my employees to feel challenged, and to challenge themselves in life. And to grow. Whether it's through my company, or outside my company. If this is your challenge, I'd love to support you on it,'” she said.


With her boss's blessings, Worcester ramped up her planning. In hindsight, she acknowledged that she may have underestimated the effort required, even if she never underestimated her abilities.

“I've always been very independent,” she said. “I'm the type of person where you can throw me into any situation, and I'll be resourceful and resilient. So it just sort of came to life really suddenly.

“Someone gave me advice, and I give everyone else this advice – You can plan all you want, and you can buy all of the gear that you think you'll need, but nothing can prepare you for something like this,” said Worcester. “You just have to know that it's going to be trial and error, and that you're going to learn a lot along the way.” 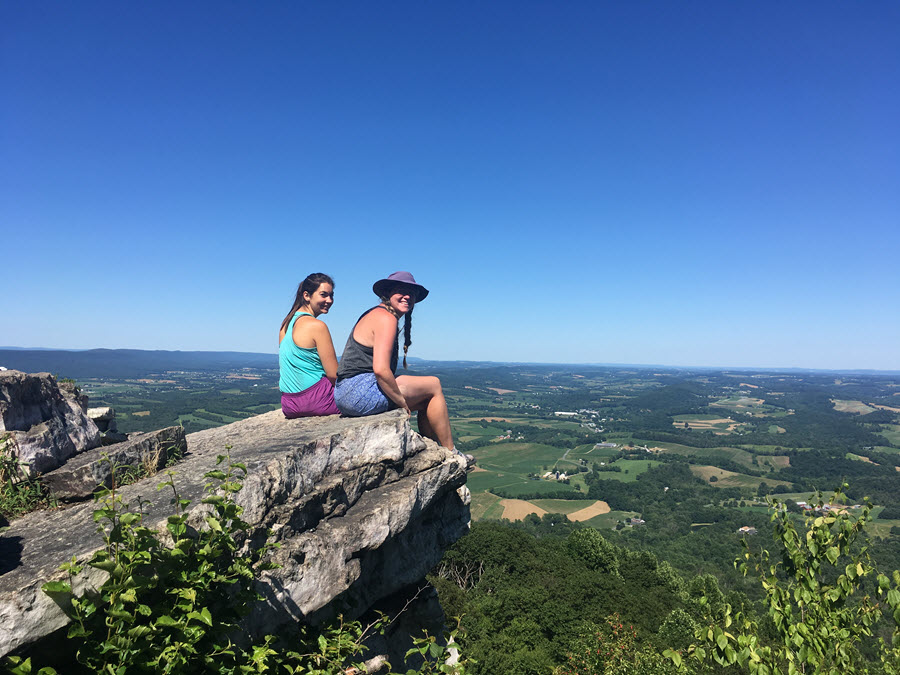 So Worcester read blogs, collected the equipment (thanks to her employee discount at Boston Ski + Tennis, she was able to keep those expenses under $1,000), and quizzed trail veterans.

“I had mentally prepared myself that it was all going to be a learning experience, and I had a friend – Russ Piechocinski – who had through hiked a few years ago,” she said. “He was a great resource. I picked his brain non-stop. That, alone in itself, was pretty re-affirming. Or reassuring.

“So essentially what I did for preparation of this trip, other than preparing myself mentally and purchasing the gear, was staying up at night reading about it, researching, and reading a lot of other people's blogs.”

On March 20, Worcester launched her epic undertaking, starting with that frigid overnight sleeping on the snow on Springer Mountain. Almost six months to the day later, on Sept. 19, she summited Mount Katahdin in Maine. Worcester had traversed 14 states, averaging between 14 and 15 miles per day. 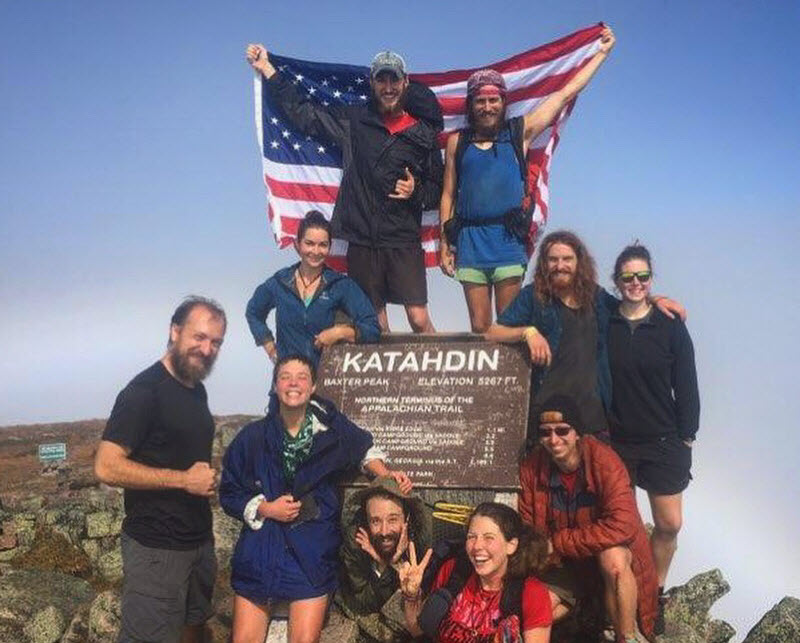 “That's not including days off,” she said. “You needed the days off to maintain your sanity.”

Remarkably, Worcester didn't suffer a single blister (“Thank god for sock liners,” she said), though she had a few bouts with heat rash and the norovirus. Asked what her biggest surprises were, she laughed.

“I know this is going to sound like a shocker, but it's a lot of walking. It's a lot of walking,” Worcester said. “My biggest surprises were learning how much you can put up with, how resilient one can be. When I first started, if it was raining, we'd all run for cover. Toward the end, rain was nothing. I'd hike all day in the rain. If the gear got wet, it was no big deal.

“So my two biggest surprises was learning how resilient one can be, and learning about your own thresholds.”


The 180-day trek presented challenges, both mentally and physically. An estimated 4,000 hikers start the trail every year, yet only one in four finish, said Worcester.

“I had a friend who had also completed it, and we chatted after the trail,” she said. “We were talking about all the people who had gotten off. He asked if I ever thought about quitting, and I said no. Certainly there were days when I didn't feel like hiking, and I wanted to take a day off. So sometimes, that's what I'd do. I'd take a day off. But I never thought about quitting.” 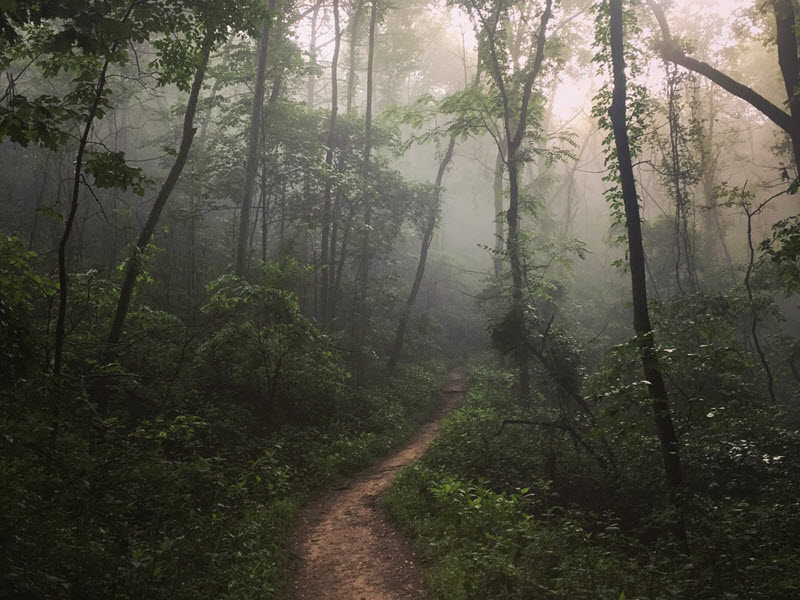 Though fit, Worcester found that she couldn't always keep pace with other hikers.

“Everyone has that first really tough day. I remember my first tough day,” she said. “I had gotten sick in Tennessee, and my friends kept hiking, so I was a few days behind them. I was feeling hopeless that I'd never catch them. So I woke up in the morning, and was feeling sad about it, and just dragging my feet. And I came across this gentleman, and he asked, 'How's your hike going?'

“I just looked at him and was honest. I said, 'I'm feeling really hopeless. I'll never catch up to friends. And I'm tired. I'm just mentally drained,'” said Worcester. “He turned to me and said the most amazing thing. He just said, 'Well, maybe you're meant to be here now.' That stuck with me through the entire trail. Whenever I felt behind, or anxious, I just thought, 'You know, maybe I am meant to be here now.' And I just reminded myself of that.”


That attitude fit nicely with the resiliency that Worcester knew she brought to the trail. She also discovered the tight-knit community that the Appalachian Trail engenders.

“They have this phrase, 'The trail provides,'” she said. “I had miscalculated my food bag one day. I was going to be in town the next night, but I didn't have any snacks to get me there. I was really low on food. And the people around you will just say, 'You don't have breakfast? I have an extra one.' Or 'share this with me.' You share a lot. And that's what goes into becoming so close to these people so fast.”

That shared esprits de corps, said Worcester, was not just a benefit, but often a necessity.

“You have to rely on them mentally, too, to get you through hard times,” she said. “You're carrying your whole world on your back. You're exposed, in a sense. And you learn so much about people. They're so open, and so respectful toward one another. There are so many different walks of life. I met people ages 17 to 85 on the trail. Some of my closest friends were retired couples. So really – age, gender, ethnicity, everything – is out the window.”

She also was gifted with a staple of Appalachian Trail hikers – a nickname.

“It was cruddy weather. I was behind the group, it was so cold, we were by the Smokies, so it was the first week or so on the trail and I was completely by myself,” said Worcester. “To pass the time, I made up a song about my trekking poles. It was to the tune of God Bless America,' but it was 'God Bless my Trekking Poles.'

“When I got into camp, there were probably 20 to 30 people at this camp site, and I'm just miserable, but I had a smile on my face,” she said. “I asked them if they wanted to hear the song I made up, and I sang it to everyone. And somebody says, 'Oh gosh, your name has to be Jukebox.'”


The name, like Worcester's resolve, stuck. Though Worcester embarked on her hike alone, she rarely felt lonely.

“There was never a time that I was scared or nervous or uncomfortable,” she said. “In the beginning, you're surrounded by so many people. Sometimes you're alone in the woods, but the only people you come across are like-minded individuals. The first time that I camped completely by myself, with nobody around me, I was a little nervous, and a little unsettled. But the second time I did it, I thought 'Oh man, I can be as loud as I want, I can wake up when I want, or play music, or sing.' I was on my own schedule. And it was really kind of nice to have that solitude.”

The memories, including breathtaking vistas, spectacular mountains ranges, sunrises and sunsets, are almost too numerous to count. But the Appalachian Trail also gave Worcester a unique perspective into her own character. 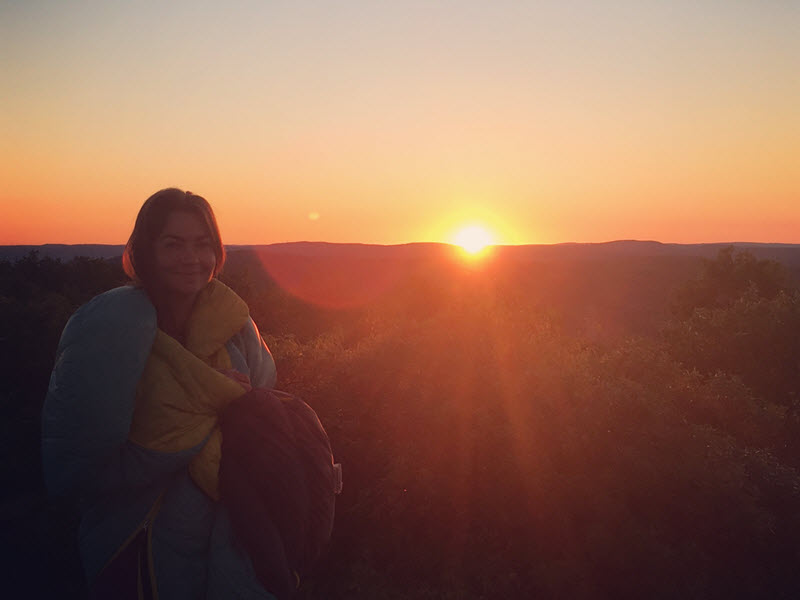 “I'm more comfortable with myself, more comfortable and open with others,” said Worcester. “I learned how to set goals and work toward them. I learned that there's so much to explore, and to really not be held back by worry and doubt.

“So many people are so nervous to embark on something like this, but it's one of those things where you just have to stand on the edge of the cliff and jump,” she said. “I think back and remind myself to embrace where I am in the moment, and understand this great adventure. The biggest thing is, forget about the miles, and just enjoy where you are.” 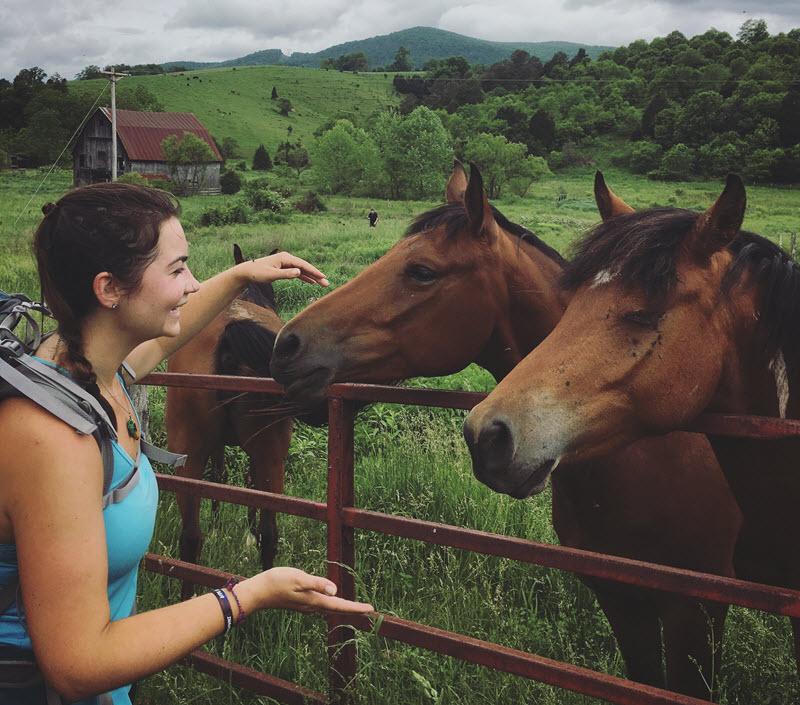 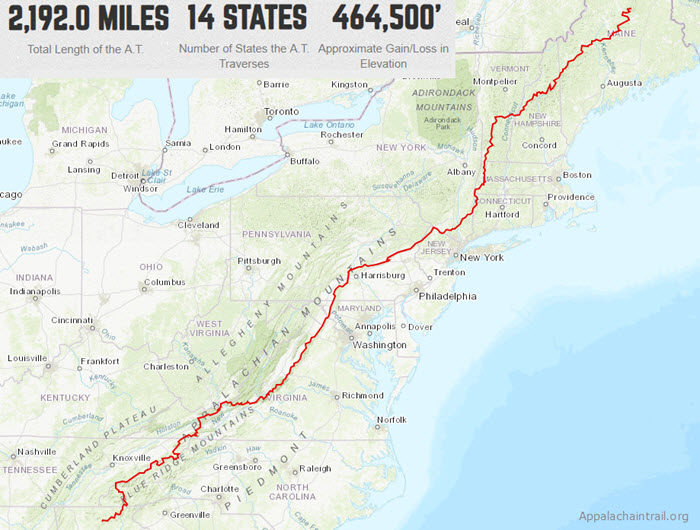 Choose your adventure with the interactive Trail Map of the Appalachian Trail.

Special Thanks to the great team at Boston Ski + Tennis.