The following is the next in an ongoing series of profiles – “Partners Who Inspire” – highlighting friends in the outdoor industries that Kulkea works with, and their businesses.

There's a popular sobriquet in adventure racing circles that's used to describe a particularly rugged brand of competitor – “hard man.” While most “hard men” (and “hard women,” for that matter) do have chiseled physiques, the moniker is actually more indicative of what the person possesses from the neck up. Toughness, resilience, resolve, and fortitude are all rock-solid trademarks of a “hard man.”

Colorado has a synonym for hard man – “Leadman.” It is the title – along with “Leadwoman” – given to the winner of the annual Leadville Race Series. The grueling series combines a mountain marathon, 50-mile mountain bike or trail run, 100-mile mountain bike race, 10K trail run, and 100-mile trail run over several weeks. The series translates to almost 300 miles of racing over mountainous terrain.

“The Leadville Race Series is pretty special,” said Dan Gump, who lives in Westminster, CO. “The community that has developed around the series is amazing. I've raced many endurance events and have had great experiences, and there is just something about Leadville that will always be special to me.”

Gump, a sales representative for Kulkea, Meier Skis, Goode Poles, Shred Helmets & Optics, Holmenkol, and Fast Straps, is by all accounts worthy of the “hard man” title, though he grew up in a more traditional sports setting.

“I've been an athlete for most of my life,” said the 40-year-old Gump. “As a kid, I played the regular team sports, but never really found one that stuck with me. My favorite was probably baseball, but more because that is just kind of what you did. I started skiing when I was 5, and mountain biking at 14, so those have really been the constants in my life.”

Those interests underwent subtle changes as Gump got older.

“I would say that my athletic pursuits are always evolving. I was lucky to figure out early on that my passion was in outdoor sports,” he said. “The sports never really change, but the focus in any given year may shift. I do think that there are a fair amount of people that make that transition as older athletes.”

Like many outdoor endurance athletes, Gump eventually heard the siren's song of the Leadville races.

“I remember first reading an article about the Leadville 100 Run in the local paper when I was pretty young, and thinking that a 100-mile foot race was impossible,” he said. “Later, once they started doing the mountain bike race in the mid-90s, I always kind of thought about it, but it still seemed unattainable.

“In the late '90s and early 2000s, I stepped away from racing and really just focused on skiing and just riding for fun,” said Gump. “I started racing again seriously around 2011 and found that endurance events really suited me. And I thought maybe Leadville would be possible.”

Gump first dipped his big toe into the Leadville arena with one of the series' “shorter” events.

“After racing other long events, I registered for the Silver Rush 50 mountain bike race in 2016 and got a coin through the lottery process,” he said. “I had decided about a month earlier when I was out for a run with my wife that, if I got a coin, I was going to defer my entry until 2017, and enter Leadman, which I did.

“I spent the winter training, and after making it through the first four events ultimately timed out at the halfway point of the 100 run,” he said.

The 2017 campaign, said Gump, was an eye-opener, and proved to be a learning experience.

“To me, one of the things I did not expect when I started racing the Leadville races was how demanding all of the races are,” he said. “The mystique is obviously around the 100s, and for good reason.

“They're very hard races, but really the Leadville Marathon, and Silver Rush 50s – which you hear less about – are shorter but just as hard,” said Gump. “All of the Leadville courses will push your limits.”

Even the events he did complete didn't provide the results Gump was looking for. Which, in the spirit of a true hard man, only provided more motivation. 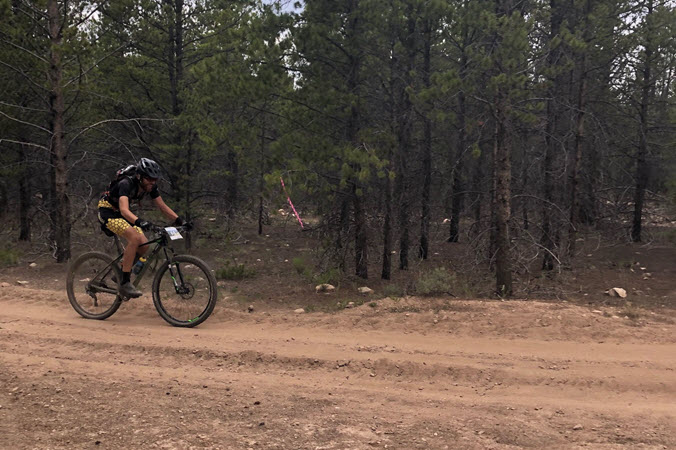 “I really hit a wall climbing up the power lines. I was fighting with my stomach a bit, and cooler weather started to move in that slowed me way down,” he said. “But that’s Leadville. There are always those nasty little thoughts that pop into your head. The feelings that you should quit or stop pushing so hard, but you just learn to shut them down.”

In the true spirit of “misery loves company,” the Leadville Race Series has no shortage of competitors. Each year, the events all sell out, and openings are awarded based on a lottery or previous results. Those who participate become family.

“Leadville has one of the best communities surrounding the race that I’ve encountered,” said Gump. “It's just a bunch of people with big goals and a love for the sport and community.”

Determined to improve on his previous results, Gump doubled down on two Leadville events this past summer.

“This year, I started to refocus on Leadville once again,” he said. “I went back to the drawing board a bit and decided this season I would focus on completing the Silver King competition – which is the Silver Rush 50 mountain bike race and Silver Rush 50 Run on back-to-back days – in preparation and as a qualifier for the 100.

“I completed both, got a token, and will be competing in the 2020 Leadman competition,” said Gump.

“I don’t quite know how to describe [Leadville] other than having a sense that absolutely anything is possible,” said Gump. “Though my [family might] think I’m a little crazy, I have to say I have such a supportive community of people around me. Most importantly, I have the most supportive wife in the world.”