Where do you go if you’re interested in skiing near Chicago? O’Hare Airport. Of course, that old joke is based in the fact that while the Chicago area is blessed with many natural resources, mountains aren’t one of them. If you talk to the big western resorts, you’ll find that Chicago is indeed one of their biggest markets. People are willing to hop on a plane to enjoy skiing and snowboarding for that once-a-year mountain vacation.

But you don’t have to take to the skies to hit the slopes. Illinois may be the second flattest state in the country—Florida is No. 1—but you can still find plenty of hills that have some surprisingly good ski and snowboard options. If you’ve never tried skiing or snowboarding before, the smaller hills are great, affordable places to learn. So skip those security lines and luggage fees and take the day to explore the best slopes close to Chicago.


Many western suburban kids have learned to ski at Four Lakes , a big hill in Lisle that’s been around for more than 50 years and is less than 30 miles from downtown Chicago. While only about 100 feet in elevation, the hill does feature seven different lifts (all tow ropes) and a variety of slopes to test skiers and boarders as they improve. There’s even a terrain park for snowboarders to show off their skills. During the week there’s night skiing until 10 p.m., and snowmaking allows the hill to stay open as long as the temperatures cooperate.


Operated by the Bartlett Park District, Villa Olivia is a bit bigger than Four Lakes, with 180 vertical feet, and most importantly for a lot of skiers and snowboarders, a chairlift to the top of its longest trails. (Three other tow ropes are also on the hill). You’ll find two easier runs, two more difficult runs and one most difficult, in addition to a snowboard terrain park. Villa Olivia is located northwest of the city close to Elgin, Ill., and about 40 miles from downtown Chicago. Also available is a fun tubing hill with a magic carpet lift that makes it very easy to entertain young kids.


Update: Ski area recently closed. While Raging Buffalo is open to both skiers and snowboarders, it’s a terrain park designed more for those interested taking advantage of the unique challenges on the way down, like half pipes, table tops, and rails. The hill features a 150-foot vertical drop with five runs, which will change throughout the season for more variety. It’s an excellent place to learn to snowboard, with a magic carpet lift up the beginner hill, Learn to Ride Burton Snowboards, boots, and helmets for rental, and excellent instructors. Plus you’ll find plenty of inspiration watching the tricks going on around you. Raging Buffalo is located in the northwest suburb of Algonquin, about 45 miles from downtown Chicago. 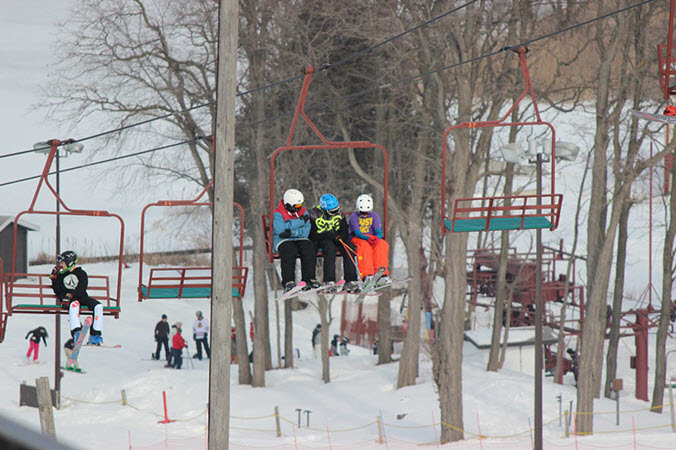 Located about 65 miles from downtown Chicago just across the Illinois border in Wisconsin, Wilmot Mountain is your closest option when it comes to a traditional ski resort. Wilmot features 25 unique runs accessed by eight chairlifts, plus three tow ropes in a separate beginners’ practice area. You’ll find long (at least by Midwest standards) green and blue runs for those who like to cruise, plus more challenging black-diamond runs and a mogul field. A terrain park is available for snowboarders interested in tricks, and there’s even a Snocross course, which features banked turns, jumps and lots of speed. Vail Resorts purchased Wilmot in early 2016, which should bring even more excitement to the resort in years to come.


Farther into Wisconsin and just north of Lake Geneva—about a 90-mile trip from downtown Chicago—is Alpine Valley , which features 90 skiable acres, a 388-foot vertical drop and a long run of 3,000 feet. This season it also launched a new learning-to-ski area that’s based on “terrain-based learning.” The method uses a sculpted gentle slope that will help skiers intuitively develop the methods of turning and stopping. The area is accessible by four magic carpet lifts, which makes getting back to the top a breeze. Once you get past the beginning stages, you’ll be able access the top of the mountain via seven chairlifts, including three high-speed quads. Three terrain parks are available for snowboarders, and the Alpine Valley Resort offers the only ski-in/ski-out rooms in southern Wisconsin, for those who want to spend a weekend on the mountain.


Located near Galena, Ill., about 160 miles from downtown Chicago, Chestnut Mountain is more likely a weekend trip. But with 19 trails spread over 220 acres and taking advantage of a 475-foot vertical drop, Chestnut Mountain is the top ski destination in Illinois. Of course, the northwest part of the state around Galena really doesn’t look anything like the rest of Illinois, with an impressive array of rolling hills. You’ll find plenty of variety on the mountain, from the gentle glide of the bunny slope to black-diamond runs. The terrain park for snowboarders is one of the biggest in the Midwest. Stay at the nearby resort for easy access to the slopes.


While Devil’s Head Resort is located 184 miles from downtown Chicago in Merrimac, Wisconsin, plenty of skiers and snowboarders are happy to make the three-hour trip. The resort is located atop one of the highest mountains in Wisconsin, with 500 feet of vertical drop. You have your choice of more than 30 runs groomed twice a day to ensure a smooth ride. The mountain is about evenly divided with 30 percent for beginners, 40 percent for intermediates and 30 percent for advanced skiers and snowboarders, with the longest run more than a mile and a half long. The terrain park at Devil’s Head is a big draw for snowboarders, and the ski-in/ski-out accommodations at the resort let you take maximum advantage of your time on the mountain.

Written by Jeff Banowetz for RootsRated and legally licensed through the Matcha publisher network. Featured image provided by Courtesy of Wilmot Mountain.

Recent Posts:
10 Small Ski Gems in the North East.
How to Spend 5 Days in Alta.
So, You Wanna Try Splitboarding? Here’s What You Should Know.