From Whaleback to World Championship Silver

Asked what her most cherished achievement was to date, the 22-year-old Krass replied: “Getting second at World Championships in big air stands out the most to me.”

“It was in front of my home crowd in Park City, and my entire family was there, which is a rare occasion,” said Krass. “It was just amazing to be able to jump under the lights in front of so many people. To land the tricks I was hoping for was the cherry on top.”

Krass's stunning 2019 World Championship result was two decades and more than 2,000 miles away from tiny Whaleback Ski Area in Enfield, NH, hard by Interstate 89 as it winds from Concord, NH, across the Vermont border and bends north toward Canada. It was at this local hill that Krass, a native of Norwich, VT, was first fitted with a pair of skis by her parents, Diana and Peter, when she was only two years old.

“My mom would take me there on the weekends, and I skied at Whaleback until middle school, and then I went to Waterville Academy,” she said. “Even at such a young age, I always loved the snow. My brother and I would always be in the backyard, either skiing, making a snow sculpture, or sledding.”

Like many younger siblings, Krass credits her older brothers – Pierson and Alex – with playing an influential role during her formative years, especially on the slopes.

“I started following my oldest brother through the park, trying to do what he was doing,” said Krass. “Whaleback had an awesome terrain park, and a huge crew was always there.

“I just remember hiking rails every day with the boys,” she said. “Growing up, I never raced. But when I first started competing, I did slope, pipe, aerials, and moguls.”

Clearly, the sport spoke to Krass right from the beginning. The passion hasn't abated in the past 20 years.

“Skiing is always an escape from the rest of the world,” she said. “Once I'm out on the slope, it is the only thing that matters, which is why I love it so much. With slopestyle, there's a lot of creativity. And there are always things you can improve on and learn, so it is very addicting.”


Krass said the discipline's physical and mental components, as well as the factors outside her control, are an intriguing and seductive test of her own abilities.

“It's challenging because there are so many different elements to it,' said Krass. “You obviously need to nail down six tricks in the same run, so there's a lot to think about.

“There are also variables such as weather that can play into it mentally,” she said. “There could be no wind when you drop in and then, all of a sudden, a gust could hit as you're going into the last jump. So you really have to be zoned in the whole time.”

Add going toe-to-toe against the course, and a slew of competitors, and slopestyle checks off all the boxes that Krass needs to get her blood racing.

“Competitions push me to be the best that I can, and I am always working hard to dial in new tricks and make old tricks more consistent so that I can perform to my best ability on competition day,” she said. “I know I need to put in the work if I want to win.” 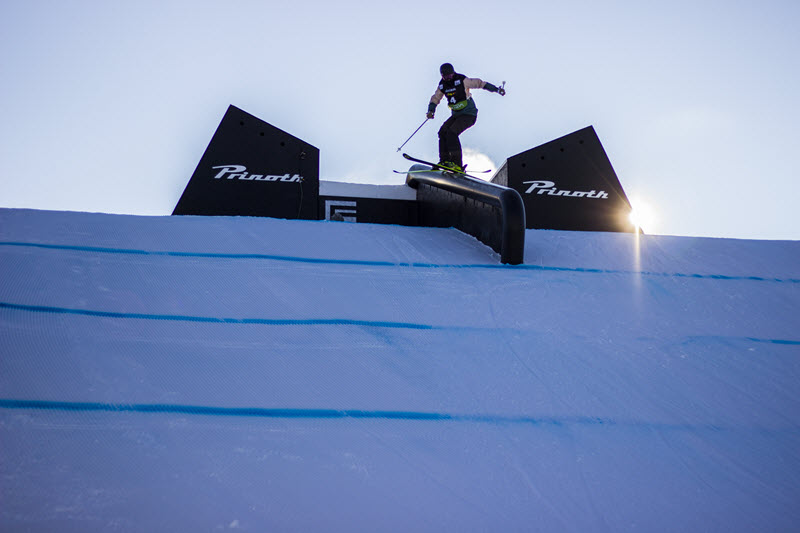 Krass's skiing addiction led to the freestyle program at Waterville Academy, and eventually to a spot on the United States Olympic team for the 2014 Games.

“I'm very proud of going to the Olympics in 2014,” she said. “It felt so surreal to be there as a 16-year-old, and I am so grateful for that experience and all of the people I was able to meet. Interacting with all of the other Olympians from so many different countries was definitely the best part.”

Like another Kulkea athlete – New Hampshire's John Brown – Krass had realized that her future dictated a move West. Specifically, she headed to Park City, UT, home of the U.S. Ski & Snowboard Center for Excellence (a fancy name for “training facility”). It was a bold step for a teenager.

“I moved to Park City when I was a junior in high school,” she said. “I transitioned to online school so that I could take full advantage of the opportunities I had in skiing.

“When I moved to Park City, I actually hadn't made the US team yet. But it was the year of the 2014 Olympics, and I wanted to give it all that I had,” said Krass. “At the end of that year, I made the US team, and the facilities out there are a large reason I've stayed there.”

Krass has also drawn on the accomplishments of a certain French Canadian world champion and 8-time Winter X Games gold medalist from Quebec for inspiration.

“I always looked up to Kaya Turski growing up,” she said. “She was constantly pushing women's skiing and trying to keep up with the men, which I admired so much.”

Krass is proving to be a role model herself. Not content with simply being a world-class athlete, she is also a junior at Dartmouth College in Hanover, NH, pursing an Ivy League education – she is studying economics and environmental studies – while competing for podium spots.

“Dartmouth is on a trimester system, so I actually take the winter term off,” she said. “It works out perfectly where fall term ends before Thanksgiving and spring term doesn't start until the very end of March. While I am at school I stay in skiing shape by doing gym workouts every day. That being said, I do still miss a lot of school for skiing during fall term.”

This fall, Krass will miss three weeks of school for training and World Cups in Europe. Despite those obstacles, she is looking forward to the upcoming season.

“I love the balance of pursuing my education and my ski career, but it is definitely challenging at times,” said Krass. “Of course, it's challenging when I am missing so much class time, so I have to work extra hard to make that up.


“In addition, it can be challenging to think that I am on such a different path than others,” she said. “I watched all of the students and friends I started with graduate this spring and go into the real world, which was difficult, knowing that I have two more years left.

Throughout, Krass has kept her focus on the “big picture, revealing a maturity that belies her years. After all, “having it all” requires sacrifices. But the rewards are tangible.

“The biggest reward of this balance is going to be when I finish school,” said Krass. “I'm just so thankful that after skiing, I'll be set up to have another career to pursue. You never know when skiing will be taken away, so it's reassuring to know there is a lot more in life.”

Another bonus of attending Dartmouth is that it represents a homecoming, and gives Krass the chance to reconnect with her family.

“My parents now live in Norwich, which is a huge reason I go to Dartmouth, because otherwise I would never get to see them,” she said. “Every time I go back to school, I get to spend a couple of days at home and reset from the busy travel life.”

During those rare moments of down time, Krass has found other interests. Not surprisingly, many focus on physical activity.

“I love to mountain bike, play tennis, go camping, hike, boat, jet ski,” she said. “In the past couple of years I've also gotten into playing the guitar. Especially in the winter, it's a perfect thing for me to do when I need to just get away from everything else and reset my mind.”

That's a good thing, because Julia Krass doesn't plan to slow down any time soon.